This was the first appearance for Bangladesh in the semi final of an ICC tournaments. As Bangladesh played really well in last 2 years so Indian team doesn’t want to take them lightly. Indian captain won the toss & elected to bowl first. In the first over Bhuvneshwar took the wicket of Soumya Sarkar and then Shabbir Rehman played some attacking shots but in 7th over he got out after scoring 19. In first 10 overs Tamim unable to rotate the strike but after that Tamim & Rahim looking dangerous. Ashwin & Jadeja unable to stop the singles and these two were looking dangerous at the same time part timer Kedar Jadhav took the wicket of Tamim Iqbal(70) that time Bangladesh were 154 for 3 in 27.6. In next 6 overs, Bangladesh only scores 23 runs and then lost two wickets of Shakib (15) & Rahim (61) that put pressure on Bangladesh. Mahmdullah (21) &  Hossain (15) added 40 runs for 6 wickets but after that Bumrah took 2 wickets that decrease the scoring rate at the end captain Mortaza scored 30* that help Bangladesh to reach 264 in 50 overs. Kedar, Bumrah & Bhuvneshwar took 2 wickets each where Jadeja took one wicket. 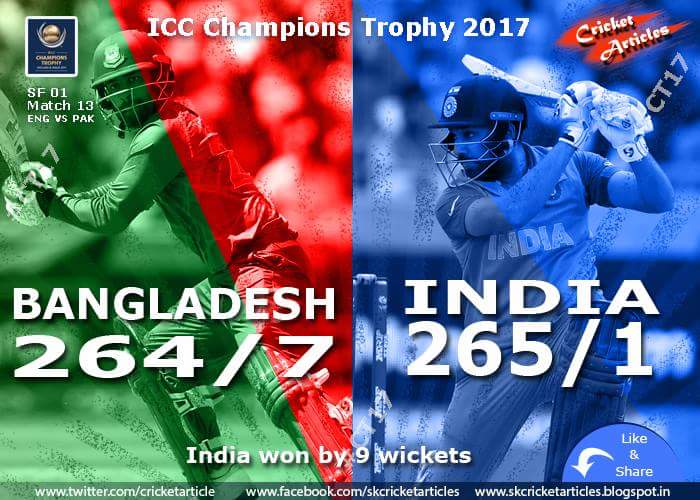 265 wasn’t a big total at Birmingham because Sri Lanka chased 322 against India. Also, the main thing is it wasn’t big for inform Indian batting. Both openers started well against all bowlers. Dhawan’s pull shot for 6 was fabulous. In 15th over Dhawan (46) got out that time score was 87. With this 46 Dhawan became the highest run scorer for India in Champions Trophy history. Then Kohli & Rohit played excellent shots. They didn’t give chance to any Bangladeshi bowler & it looks like India will win in 40 overs. Due to the injury of Rohit, they didn’t take any risky single but they control the required rate. In this Champions Trophy Rohit got out for 91 & 78 but in this match, he scored his 11th ODI century also Virat Kohli became the faster to reach 8000 ODI runs. Rohit (123*) & Virat (96*) added unbeaten 178 and India won the match by 9 wickets with 59 balls remaining. Only captain Mortaza took one wicket. Rohit Sharma awarded by MOM for his brilliant 123*