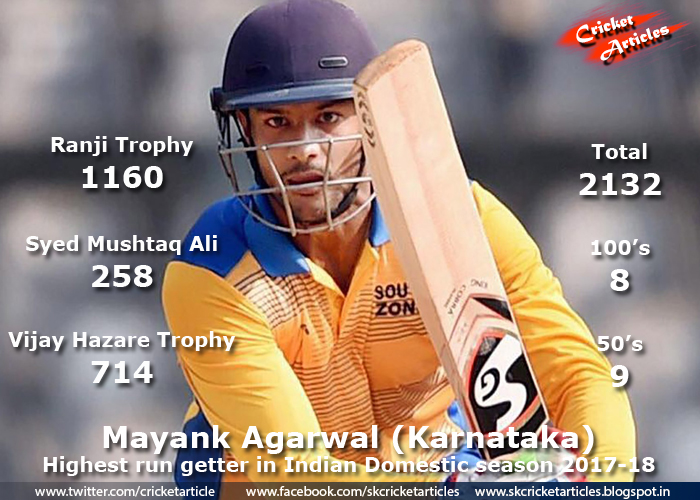 Mayank Agarwal 27 years old opening batsman from Karnataka. He was the part of 2010 Under-19s World Cup. He also got the place in India A but he struggled with his form. At the start of his career, he is known as the limited-overs specialist. Mayank Agarwal made his Ranji Trophy debut for Karnataka in the 2013-14 season.

This 2017-18 domestic season was fabulous for Mayank. He scored 1160 runs in Ranji Trophy with 5 centuries & 2 half-centuries with a highest of 304* against Maharashtra. In first two matches he only scored 31 runs with two ducks in 3 innings then after that he scored 5 hundred & 2 fifties in next 5 matches (8 innings). In the semi-final, he scored 15 & 3 against Vidarbha and Karnataka lost the match by 5 runs.

After successful Ranji Trophy season, Mayank Agarwal was looking to continue his performance in Syed Mushtaq Ali Trophy. In 9 matches he scored 258 runs with 3 half centuries.

Mayank Agarwal continued his performance in Vijay Hazare Trophy. He scored 109 against Baroda in the first match and he scored 714 runs with 3 hundred & 4 fifties with a highest of 140 against Hyderabad. His performance in knockout matches was fabulous as he scored 140, 81 & 90 in quarter-final, semi-final & final against Ht=yderabad, Maharashtra & Saurashtra respectively. His 90 against Saurashtra in the final gave Karnataka 3rd Vijay Hazare title in 5 years.

But even after scoring more than 2000 runs in a domestic season still Deodhar Trophy & Irani Trophy remaining in the domestic season. He finishes with the most runs in an Indian domestic season even though he was not selected for the upcoming T20I tri-series in Sri Lanka. This tri-series will be the better stage to check bench strength. So if Mayank Agarwal was selected then that would be good for in-form Mayank Agarwal. Because after the period of 1-year Indian team will be playing World cup so Indian team won’t change much on the team so this tri-series will be useful for bench strength.

Most runs in a season